An Academic paper presented on February 4th, 2017 at the Festival of Original Theatre (FOOT), University of Toronto, Centre For Drama.

Just as a Dancer communicates through movement and a Musician communicates through a series of notes, a Playwright needs words on a page until the potential of the text can be fully expressed physically on a stage. It would be natural to think that a Writer’s development would originate from literature, but not in my case. My ‘in’ was music. I was attracted to the shape and structure of songs, the power of sound to create an immediate emotional connection and every time I start a new project, I’m hoping, maybe this time, I’ll get just a little closer to harnessing and translating this power. Both scripts and musical scores use simple two-dimensional ink symbols to represent complex stimulus that can incite emotion and instigate imagery for an audience. The question for myself and my collective, Dancing Monkey Laboratories—which includes choreographer and dancer Melissa Tuplin, and Minimalist Classical composer Nathaniel Schmidt—is: can there be such a thing as a three-dimensional text? What would our parameters be for the third-dimension? We imagined this text to be different than traditional theatrical texts that are driven almost exclusively by narrative. For a performative text, the Writer must leave room for how the choreography and musical score influence the performance; understand how the text moves with them and where it competes; and perhaps even where the words could be placed on the page to approximate space and movement on a stage.

Before focusing primarily on interdisciplinary performances, I investigated the idea of structuring traditional plays like pieces of music: playing with the musical techniques of suspended chords, dissonance, and repetition to keep developing themes within a play or mirroring the ‘verse – chorus – verse’ structure of a pop song. My intention was to dissolve a single narrative so that the audience shares the responsibility of constructing their own narrative along with the performer, creating a stronger bond between performance and witness, a unique bond where a single ‘performance’ can elicit countless ‘stories’.

These concepts led to the idea of using ‘sketches’, unfinished or abandoned pieces of music by a composer. For my play Satie et Cocteau: A Rehearsal of a Play of a Composer by a Poet, I drew upon the countless unfinished compositions that were discovered in Erik Satie’s tiny, cluttered apartment after he died. After some initial research, I decided to approach the play as a series of sketches, of unfinished moments in time strung together. I took sketches of history, of Jean Cocteau and Erik Satie’s relationship, and finished them to serve the themes I was investigating in such a way that I hoped remained true to their respective characters.

This process allowed the music of Satie to exist as its own character. This gave the play its ‘scriptuality’ – meaning I wanted the structure of the play, the physical shape of the script, to also have an intention. Early in its development, before the heavy research began, I scribbled a narrative equation into my notebook:

When I returned to review my old notes, I was struck by how this mirrored, ‘verse-chorus-verse-chorus’ structure had become the actual shape of the play and how it in turn fit so easily into the very shape of Satie’s music, as an example, the mirrored structure of Satie’s ballet, Parade.

Musicologist Theresa Sauer’s Notation 21 Project has collected examples of the practice of Graphic Notation, or Eye Music,– and as someone who cannot translate the musical notation of these scores – if it’s even possible, I can begin to imagine what the intentions might be from their shapes and placement, and, how they are works of art in and of themselves.

In an article called “Scoring Outside the Lines”[1], the self-described ‘Punk-Classical’ composer Pat Muchmore suggests that musical scores are “not the music”. As an example, he writes how no performance of Beethoven’s Seventh Symphony is the entire work:

It is the ‘potential performance’ that drives me towards a thr(3)e-dimensionality, towards how and when words are spoken, word choice and placement. Even if the complete, conceptual, constructed, theoretical ideas embedded into the text are never consciously realized on the stage – their potential will always be there, within their intent, like an actor’s ‘Invisible work’.

The investigation into a thr(3)e dimensional text for myself and Dancing Monkey, is a matter of process. The academic need to explain process, which I attempt to resist, can create flow charts that range from the Classical to the Devised and everything in between. I have been asked at talk-backs and in studios with students; what process do we use to create our work and I usually panic, stumble and mumble something like “I don’t know… Ours?”. I believe that in explaining process, getting too precise can lead to tunnel vision. Each new work will have different demands, new performers and new energies, so I have kept it as simple as I can.

As there are 3 principles in the collective, I describe it as a ‘Structural Triangle’. This process involves developing each element—text, dance, and music—with equal weight and emphasis allowing each individual art form to stand on its own as well as fitting precisely together to create a unified performance. The ‘Structural Triangle’ is the guiding formula in our creation process in which we strive to build a single wave of energy out to the audience where each element echoes one another. Instead of following the traditional structure of a theatrical performance that is largely dictated by the words spoken on stage with the score and choreography fulfilling a supporting role; the Dance, Text, and Music inform and are informed by one another, they expand and compress as they are being created in an open workshop environment. Each member of the collective balances ownership of their contribution as well as actively participates in the development of the other elements, encouraging each artist to broaden the understanding of their work in the context of the production as a whole.

We began with an attempt to remove the text from an obvious narrative and to instead create imagery first. I consider this similar to a band’s set-list, a series of individual, unconnected songs, strung together with intent to create the feel of a story. This led directly to an experiment of whether the words could be ‘danced’ or replaced with a musical phrase, and how this could influence the dictation on the page. 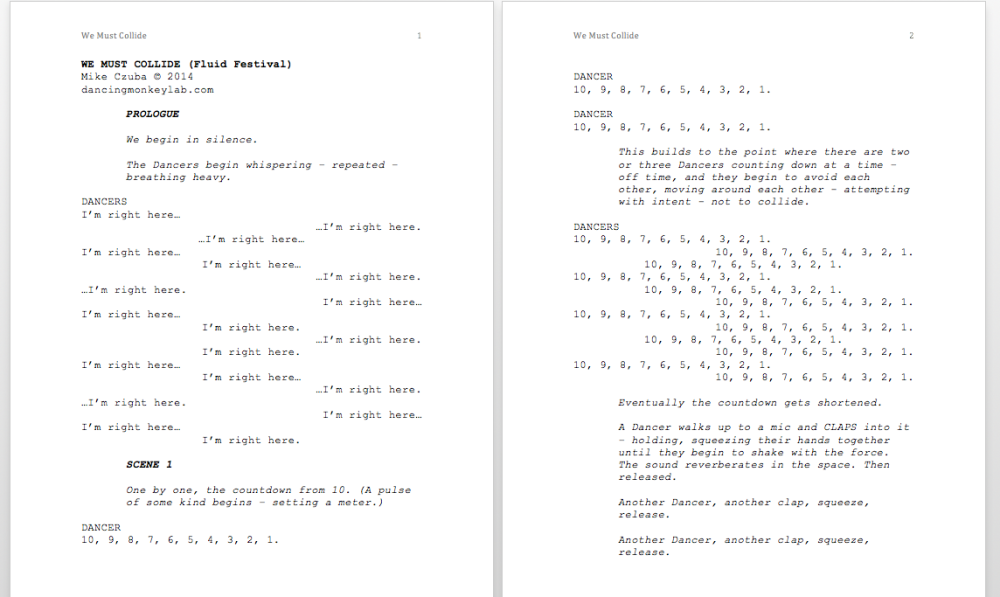 In Dancing Monkey’s dance-centered piece entitled WE MUST COLLIDE, I began experimenting with word placement. Could the positioning create intention and momentum? We presented the show in the round, with the playing space surrounded by 8 microphones, inhabited by 6 dancers and we experimented with looping effects.
Video HERE.

My inter-disciplinary work is not interested in separating the spoken word from the dance or the music but in compressing and layering them so that all three exist to fashion a single thought. In Dancing Monkey’s performance of Satellites, which presented two actors along with two dancers as their subtext, we rooted our actors in front of various microphones so we could find a balance between the movement of the dancer and the spoken text of the actors within an enveloping score. I used repetitive, overlapping text to create an inconsequentiality beyond the word’s sound, permitting the audience to absorb more of the imagery.
Video HERE.

In our latest work Humanoid – A LOVE SUPREME we continued to layer these ideas into the performers themselves, creating a deliberate distance to any immediate emotion. The text the actors are speaking in this short clip is being repeated with subtle variations for a second time in the performance, becoming more sound than words in the hope that it allows the imagery to settle and become more of a driving force.
Video HERE.

The second discovery is that the text should learn to follow as well as lead, letting the dance and music dictate some of the choices. This concept revealed itself to me when I completely surrendered to the understanding that I was writing words that would be performed by dancers with music, sometimes silently and in stillness. If the composer works with unresolved chords it would follow that the choreography and the text could also be unresolved. Film scores have been using this technique to emotionally and subconsciously lead audiences to where they might not wish to go. The experience of a repetitive pop song is the opposite, comforting audiences as they predict how a melody will end and how the images will progress. If something is unresolved, audiences are left to the mercy of the performers to lead them to a conclusion or leave them suspended with potential.

With every new project, every aspect of theatre should be approached with an intention to disrupt. This does not mean you always have to blow up the system, because disruption can be little more than a hand gently breaking the surface of a stream. From the staging, to the structure, the design, the narrative, the production and all of its peripheral attachments – from marketing to documentation to this paper – performance creators should always be asking how they can flip some metaphorical tables and cause trouble.

Just as a dancer will catch their breath and musical notes will rest, a thr(3)e dimensional text will be aware of the expanse of its breadth and be careful not to fill in all of the open spaces, to allow for moments of suspended expectation and discovery, and allow the performance as a whole to breathe.